Click here to see their video
Established in 2002, Christian charity ˜Faith and Football™ is part of the Abijah Trust (registered charity 1103783) and seeks to serve needy youngsters and their families in cities in the UK and provide support for Christian projects abroad, at the same time sharing their Christian faith with those who have a common interest in football.
Working with Christian professional footballers, including Linvoy Primus, Andy Griffin, Andy OBrien and Lomana Lua Lua of Portsmouth FC, and Darren Moore of Derby County FC, Their work is making an impact on the young people in U.K. cities and abroad who are especially in need of opportunities to be encouraged and valued. They use football as a platform for serving, for developing relationships, placing the church at the centre of communities, providing Godly role models for young people and developing life skills.
INDIA
Mustard Seed Ministries are working in partnership with Faith & Football
we introduced them to the work of Shallom House an orphanage they visited in the summer of 2004 on their mission to India.It was this visit which has inspired them to make a difference to other similar children in the region. The Faith & Football team , including Darren Moore and Linvoy Primus met the children and staff and were amazed at the way in which which the lives of these orphaned and abandoned children had been transformed through the devoted Christian House parents. They have lovingly restored hope in lives which were formerly in situations where there was no hope through a vibrant home life and education opportunities.
In May 2005 a Faith & Football team embarked on a Great Wall of China Sponsored Challenge raising sufficient funds to provide a new orphanage / care centre for the mentally and physically dis-abled, which will rescue the lives of many of the children most at risk in that part of the region of Goa,
and the rest of India. These are children who face danger every day living on the streets, deserted and abandoned. 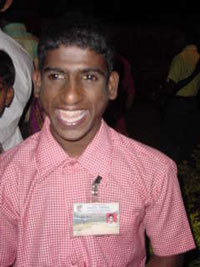 Funds raised will not only provide the much needed orphanage but, through their ongoing support, will provide sufficient to populate and sustain the facilities to change many young lives.

Here is an example of the type of children they will be directly helping, Kumar was spotted in the garbage dump area of Panjim, Goa. He was a severely undernourished child, who was totally abandoned by his parents as he was mentally retarded. He was looked after by an old lady who had no shelter herself and they were living in a paper house.
He suffered acutely both mentally and physically and was so dirty and filthy. His stomach was bloated and he needed urgent medical attention. Kumar also had hearing problems, but praise God with support from a generous donor, the doctors at Manipal Hospital operated upon him and he is now able to hear much better than before. With the love and encouragement of his new family at the orphanage Kumar is learning to speak and following special training in-house he is now attending a school for children with special educational needs. Kumar is a delightful young man, always helpful and willing to give a hand. He is 22 years old now although he has the mental age of a much younger boy. Kumar will always need support but he has the security of knowing that he will always have a loving home.
LINVOY PRIMUS ENTERPRISE CHALLENGE
For the last two academic years, pupils in Portsmouth and East Hampshire schools have taken part in the Linvoy Primus Enterprise challenge, with over 600 pupils trying to win the prize of an all expenses paid trip to Goa India with their teacher, to see at first hand the work of Mustard Seed Ministries and mission partners Faith & Football with deprived young people in that country. Each November Mustard Seed Ministries host the trip of the winning team giving them the opportunity to visit orphanages and care homes that they support.

Year one winners were six pupils from the City of Portsmouth Girls School, and year two five boys from Portchester Community School both enjoyed the experience of a lifetime.
Teams of four or six pupils set up their own businesses, raise their capitol, create their own marketing and publicity, sell their wares, with all profits generated going towards the work of Faith and Football charity in the UK and overseas. Each team are allocated a Busines Mentor to help and advise during the course of the challenge.

The challenge lasts for four months, when each team has to give their company profits and records to the organisers, which are then judged by an independent panel. All students receive certificates at a presentation event, with several merit prizes for the teams, but one team and their teacher will go to India.
The LPEC is designed to create a true business environment for pupils to experience the reality of business and to gain vital work related learning skills.
The popularity of the LPEC and a measure of its success and impact on young people has resulted in more schools and pupils entering. This year the challenge has been extended, and two winning teams from schools in Southampton and Portsmouth/South East Hampshire will share the trip to India. 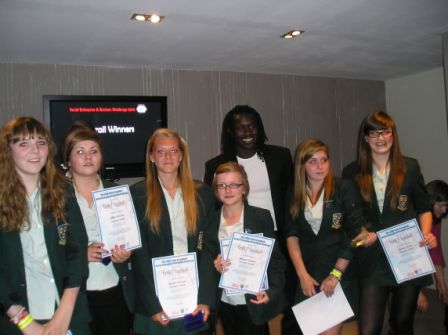